Fares
CALL FOR A RIDE PLAN YOUR TRIP DOWNLOAD APP

Ride the River: The fare for the shuttle is $4. We encourage you to purchase fares ahead of time at the Tumalo Creek Park & Float or at Hawthorne Station (334 NE Hawthorne Ave). Fares can also be purchased on the bus with cash, but CET’s drivers will not be able to provide change.

Lava Butte: The fare for the shuttle is $3. You can purchase fares with cash on the bus (no change will be given) or using E-fare. Be sure to download the TouchPass app before you arrive at Lava Lands—cell service can be spotty!

Central Oregon and Bend bus fares and tickets can be obtained through several avenues, including cash or credit card sales at CET’s Hawthorne Station and the Redmond Antler office. CET also offers electronic fare (E-fare) products that can be purchased online through TouchPass, Hawthorne Station, or via the TouchPass App for Apple or Android devices. Check out CET’s TouchPass FAQ Guide to learn more about purchasing electronic fare products.

Hawthorne Station is located at 334 NE Hawthorne Avenue in Bend. Bend bus fare can also be paid to CET drivers directly. Paying for bus fares directly requires cash only and exact change at the time of boarding the bus. Please note that all fare products are non refundable and non transferable.

Tickets can be obtained from: 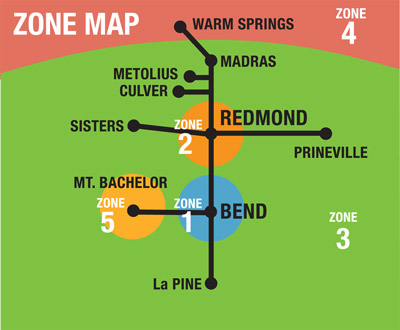